Don't use VPN in these countries 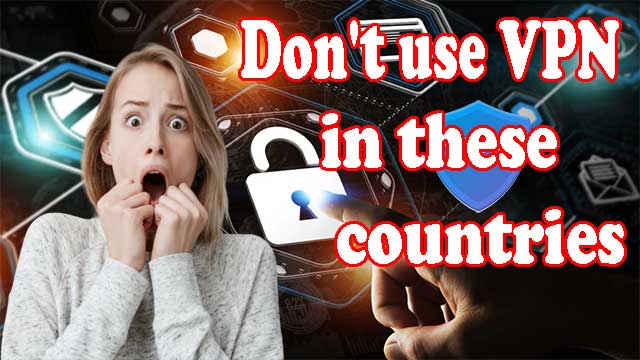 The five worst countries where you can't use a VPN have a lot in common. They are dictatorships that censor and ban the use of such applications or, for various reasons, suffer from serious communication problems.

In case you didn't know, VPNs are networks that allow users to encrypt their connection and change the IP address from where they are connected to the internet to one from a different country. This is done through software that connects them to a server located in another country that acts as an access point. This way, you have more privacy.

When it comes to VPNs, you should consider not only the location you decided to connect from but also the software or application you decided to use. An example of this is that some time ago we told you about how some VPN apps for Android sell their users' information to third parties.

The 5 worst countries to use a VPN in

The list that you will see below, in addition to being based on how dangerous it is to use a VPN for your privacy and freedom in these countries, also takes into account the quality of the connection. This is without counting the censorship that exists within them, which is a deciding factor without a doubt.

It's no secret that China has the largest and most advanced digital censors we've seen so far in the 21st century, one that seems to have come out of George Orwell's worst nightmare. Founded at the end of the 1990s, it is known as the "Great Firewall" or also the "Golden Shield Project".

Although many tried to circumvent the censorship of the communist regime by using VPN software, the regime took action by banning its use in 2017. The only exception is only for VPN providers that are licensed to operate in the country.

The authorities are so keen on compliance with this law that those who traveled as tourists to China were arrested when it was discovered that they had downloaded a VPN app within the country and tried to use it.

The only way you can use a VPN without getting caught by the Chinese authorities is if you already had the app installed on your phone or computer before entering the country.

A similar situation for China also happens in Iran, but unlike China, Iranian VPN bans are only a few months old. This followed violent protests over the September 16 assassination of Mahsa Amini.

In addition, the country imposes strong restrictions and blocks on social networks, messaging services, and news web portals. These blockades are intensified, mainly, when there are large-scale protests in the country.

In the aftermath of recent protests, the Iranian regime has not only banned the use of VPNs in the country but also access to Google Play. He was also given the task of disabling VPN servers operating in the country and blocking the web portals of companies providing VPN applications.

Like its counterparts in China and Iran, Vladimir Putin's regime is another regime that has also worked to block VPN apps to maintain existing censorship within the country.

The ban on the use of VPNs in Russia (which has been in place since 2017) works in a similar way to the one in China. The exceptions that allow VPN service providers to operate in the country are the acceptance of the terms and conditions set by the system.

The prerequisite is that VPN application providers must log their users' information. As a result of this action (and the knowledge that it would fix itself for everyone), many VPN providers operating in Russia have been forced to cease operations in the country.

The case of Syria is slightly different from the rest of the countries on this list due to the bloody war that has raged in the country since 2011. The armed conflict that raged in Syria (and is still ongoing) has hit Syria hard. country's infrastructure. This has contributed to the fact that interruptions or drops in internet service are very frequent.

Of course, the Bashar al-Assad regime was no exception when it came to censorship. Not only is the inconvenient content of the system blocked, but also VoIP, which is what makes Internet phone call applications not work.

It is also known that they have come to call Internet cafes to monitor and control the content that their customers see while browsing. With severe censorship and constant connection issues, Syria is not a good choice to use a VPN.

Of all the countries that appear on this list, North Korea is the worst. What has been confirmed is that very few people have unrestricted access to the Internet. Mainly the institutions of the North Korean regime and its supreme leadership.

The rest of the population has been relegated to using a type of internet called "Kwangmyong". Since this network is limited to only system-run web portals (which mostly contain a lot of sponsored content) a VPN cannot be installed.

In fact, there is so little information about North Korea in this regard that the country doesn't even appear in the Speedtest ranking that qualifies internet speed (fixed or mobile) for every country in the world.