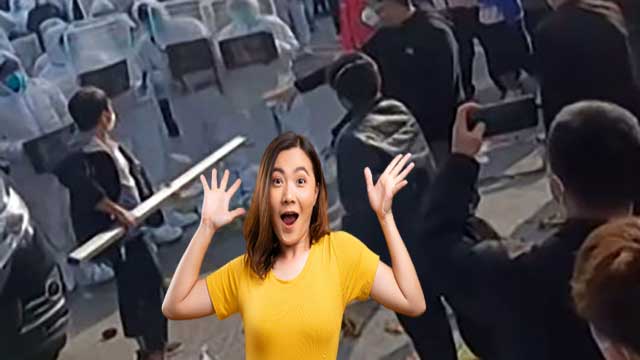 Pictures spread on social media showed that workers at Apple's largest iPhone factory in central China clashed with riot police over difficult living conditions as a result of the COVID-19 epidemic.

A series of videos posted on websites including Weibo, as well as on live-streaming apps Kuaishou and Douyin, revealed hundreds of workers streamed from their apartment buildings in Zhengzhou, the capital of Henan province dubbed "iPhone City".

The site belongs to Taiwan-based Foxconn, which employed tens of thousands of temporary assembly line employees last week after a poorly managed COVID outbreak led to a mass exodus at its factory, where more than 200,000 workers have built devices for Apple. and technical products of their ilk. Google, Microsoft, and Amazon.

The disruptions caused by sudden shutdowns across China, including Zhengzhou, have put severe pressure on Apple's ability to meet the demand for the latest iPhone 14 models.

The footage shared on Twitter showed widespread protests that erupted suddenly and continue to this day. Crowds of workers appeared to cross the barricades and run into the officers, who were wearing protective gear and carrying anti-riot shields.

Videos showed that a number of protesters had been isolated in the streets and beaten by riot police sent to restore order, but the time and place they were filmed were not verified.

The content of the videos indicated that Foxconn workers went on strike after being placed in crowded bedrooms with little separation despite the ongoing COVID outbreak. Poor quality food and non-fulfillment of bonus payments were also problems.

The rioters protested having to work alongside the allegedly infected individuals, and their concerns appear not to stem from a fear of infection, but from the possibility of wages not being paid if they test positive and forced into quarantine.

Foxconn confirmed "violence" at its Zhengzhou industrial complex in a public statement, and said it would communicate with its employees and the government "to prevent similar incidents from happening again."

He said all bonuses will be met in accordance with employment contracts and that healthy and injured worker are forbidden to arrange to stay in the same living quarters. She added that the dormitories were cleared and inspected by the government before the new employees moved in.

Zero COVID is Chinese leader Xi Jinping's signature public health strategy, a policy that has kept the virus at bay for two years but was stress tested in 2022 by a highly transmissible Omicron variant.

Those concerns have contributed to thousands of Foxconn workers choosing to flee the factory, many on foot, since late October. The chaos in Zhengzhou, where 70 percent of the world's iPhones are made, has directly threatened Apple's supply.

Apple has already begun to diversify its supply chain towards India, wary of losing one of its biggest customers in the province. And officials in Henan enlisted tens of thousands of local cadres, including lower-level Communist Party officials from nearby villages and towns, to help fill the workforce gap.

More than 100,000 people have responded to the recruitment drive, told Yang Han, Foxconn's CEO. "The next step remains to maintain proper epidemic prevention in the industrial area," he said. It was a difficult period," she said, noting that the company was "grateful to the government."