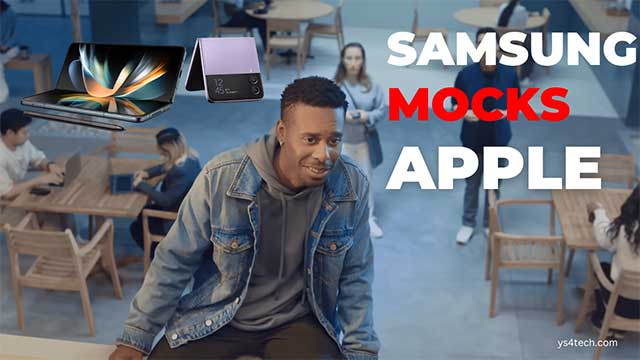 Samsung continues its long path of mocking Apple, this time targeting the iPhone 14, although the most important goal of the mockery is the marketing of the South Korean giant's product.

In an ad called “On the Fence,” a young man climbs over the wall, leaving behind a place that mimics (and looks like) an Apple Store in terms of decor, desks, trees, and appliances behind.

Then a guy and a girl come asking him for an explanation of what he's doing. He replies to them by saying that he climbed the wall to see a foldable phone from Samsung on the other side, as if to say that Samsung is in another place while Apple is behind, and then says: They have foldable phones and a great camera.

Here, a girl joins the conversation and asks: Hey, did you say a foldable phone?!

Then the young man standing at Apple's side says in a confused manner, "Hey don't leave, we're waiting, that's what we do, we wait."

As if Samsung is playing on a chord, accusing Apple of delaying the launch of new technologies such as foldable phones, and playing with the minds of Apple fans and fans who are waiting for a long time to see a foldable phone from their American company.

Then the ad ends with the words Galaxy awaits you!! (see advertisement below)

The strange thing is, that Apple usually does not respond to these sarcastic ads, because it knows that Samsung does not want to target Apple exclusively, but rather the Korean company wants to market its products, and this type of ad receives great interaction and spreads on the Internet because it is based on irony and competition, This is one of the marketing methods that attract followers and multiply views, and push the media and Internet sites to allocate space around this advertisement.

The response came from a Chinese citizen!

A Chinese citizen has reacted very strangely by publishing a video that proves to everyone that he was able to turn an iPhone into a foldable phone!

Yes, this is real and not a figment of the imagination, and this matter echoed through all the technical sites that published the clip and pictures of this Chinese citizen who developed a prototype of a foldable iPhone that works with full efficiency for all functions in the device.

The video shows various parts of other foldable smartphones that also feature a clamshell design, such as the Galaxy Z Flip and Motorola's Moto Razr phone.

The end result shows a truly foldable iPhone, which is fully functional and has a foldable screen as the camera and other basic functions work normally.

The Chinese tech specialist has shown a mock promotional video of this device, which shows that it features 5G connectivity and is powered by the A16 Bionic chipset.

The front has a 12MP selfie camera, while the screen of the device is a foldable Super Retina XDR panel, it also offers a Pro Series camera and features Ceramic Shield technology, as well as improved battery life.

what do you think of Samsung's mockery of Apple? Do you support Scott Apple? Did you like the reaction of the Chinese citizen?