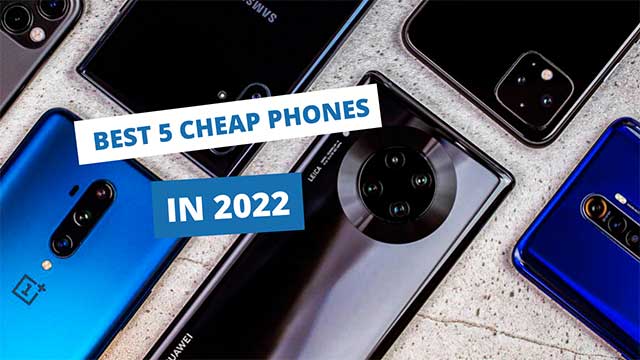 Many phone manufacturers such as Xiaomi, Samsung, Poco, Oppo, and Motorola are increasingly producing cheap and high-quality phones in the market. Today, we present to you a list of the cheapest and best 5 high-quality phones for 2022 in case you are thinking of buying a good phone without spending a lot of money.

Companies such as Xiaomi and Realme are famous for focusing on the production of mid-range and economy-class phones, which have achieved great sales, but there are other companies that sell devices in these categories at competitive prices. Here's a bunch of high-quality, cheap phones under $250.

Samsung launched the Samsung Galaxy M13 phone in global markets in June 2022. The phone comes with a modern design that resembles the company's most advanced phones and is available in green, pink, or blue. The phone features a 6.6-inch LCD screen with Full HD + resolution.

The phone can perform basic tasks such as using WhatsApp to communicate, take pictures, or browse social media. It has 4GB of RAM and offers 64GB or 128GB internal storage options. The phone features One UI Core 4.1 which is based on Android 12.

It is powered by a 5000 mAh battery that can power the phone for up to two days. On the other hand, there is also a side fingerprint sensor and support for Near Field Communication (NFC) technology.

The original price of the Samsung Galaxy M13 is $209 for the 4GB + 64GB model and $239 for the 4GB + 128GB model. Both are now much less expensive to buy on Amazon and the official Samsung website.

Motorola has some very interesting mobile phones, although they are not the most popular. If you are looking for a cheap phone with 5G connectivity, one of them is the Motorola Moto G51 5G which is one of the most prominent devices in the list of high-quality and cheap phones. The phone features a 6.8-inch LCD screen, Full HD + resolution, and a 120Hz refresh rate, which are excellent features for the price.

It is powered by a Qualcomm Snapdragon 480+ 5G processor, which has enough power for most of the tasks you can perform. Only one version is available, which has 4GB of RAM and 128GB of internal storage that can be expanded up to 512GB with a microSD card.

The Moto G51 5G has a triple-lens rear camera module that consists of a 50MP main camera, an 8MP wide-angle camera, and a 2MP secondary camera. The front camera is 13 megapixels. It has a 5000 mAh battery to give you more than a day of use. The only remaining features are the rear fingerprint sensor and Dolby Atmos audio technology.

The Motorola Moto G51 5G is currently available for a lower price tag of $229.

The Xiaomi Redmi Note 11S is a great choice in the list of cheapest high-end phones for 2022. The phone features a great and comfortable design, weighs 179 grams, and is 8.09 mm thick. It has a 6.43 inch AMOLED screen with Full HD + resolution and a refresh rate of 90 Hz. It is more than exceptional quality for the price of the device and includes all the features we demanded.

The Redmi Note 11S has a MediaTek Helio G96 processor that is capable of handling common tasks with ease. It comes with two storage and memory options, 6GB + 64GB and 6GB + 128GB, and you can increase the internal storage capacity by up to 1TB by adding a microSD card. The operating system is MIUI 13, which is based on Android 12.

You can take high-quality photos with your Xiaomi phone, especially with the 108MP main camera. Use the 13MP front camera if you want to take high-quality selfies. The 5000 mAh battery in this device that lasts for more than a day of use supports 33W fast charging.

The 6GB + 64GB version originally cost $249.99. But you can get it for a much lower price on Amazon or in the official Xiaomi store. Additionally, you have the option of the 6GB + 128GB version, which usually costs $279.99 but is now cheaper.

The Realme Narzo 50 5G is one of the best inexpensive phones and a good choice in the list of high-performance and cheap phones, which costs just over $200. The user will not need to purchase a protective case separately because it is already included in the phone box. There is a fingerprint sensor on the right side of the device.

You can expect vibrant, clear, and smooth images thanks to the 6.6-inch LCD screen, Full HD+ resolution, and 90Hz refresh rate. It is powered by the Dimensity 810 processor from MediaTek, which provides good performance, and a 5G modem. You can take advantage of Android 12 updates which work with Realme UI 3.0 interface.

There are two cameras on the back, but only the 48MP main camera is useful for taking high-quality photos. Realme Narzo 50 5G has a large 5000mAh battery that will last more than a day. It takes about an hour and a half to fully charge a device that supports 33W fast charging.

The POCO M5 is one of the latest budget phones from POCO and one of the great choices in the list of high-quality and cheap phones. It weighs 201 grams and is 8.9 mm thick. Available in yellow, green, and black. It features a 6.58-inch IPS LCD screen with Full HD + resolution and a refresh rate of 90 Hz.

The phone is powered by a MediaTek Helio G99 processor, there is a fingerprint sensor on the side, and has Near Field Communication (NFC) technology. The operating system is MIUI 13 which is based on the Android 12 operating system.

There are three cameras on the back, the main of which is the 50-megapixel main camera. Also, it contains a 5000 mAh battery, which lasts for two days, which is considered the most prominent feature of the phone. Although the included charger has a power of 22.5W, only 18W fast charging is supported.