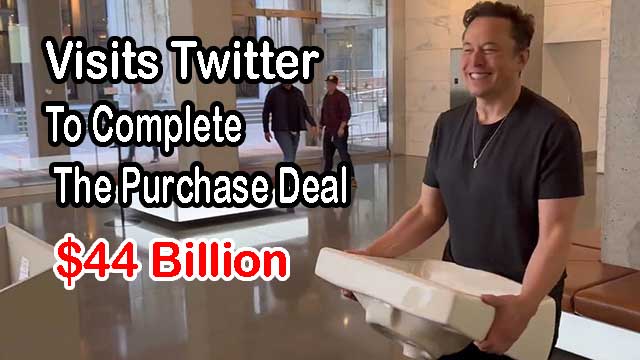 Elon Musk appeared at the Twitter office in San Francisco. Tesla's owner is close to finalizing the purchase of the social media platform for $44,000 million.

The world's richest person tweeted along with a video of him in the lobby of the building on Wednesday.

The long-running deal has yet to be formally finalized, and a Delaware judge has given Musk until Friday, October 28, to finalize it.

Twitter employees may not see the funny side, as Elon Musk has reportedly told the bankers financing his deal that he intends to lay off about 75% of employees.

The world's richest person renewed his bid to buy the company earlier this month after trying to undo the purchase.

Elon Musk agreed to buy the company for $54.20 a share in April, but in July he said he changed his mind, citing issues with bots and spam within the platform.

Twitter then sued him in Delaware Chancery Court to enforce the deal. In his message to Twitter, Musk agreed to pay the full price but made it clear that it was contingent on obtaining the necessary funds to pay it.

"The company's intent is to close the transaction at $54.20 per share," Twitter said in a statement after receiving the letter.

If the deal goes through on Friday, Musk will immediately become the new owner.