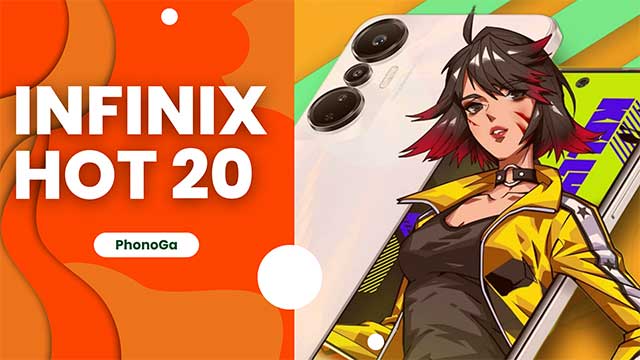 The phone still comes with a 6.82-inch screen that provides a resolution of 720 x 1600 pixels and HD + display quality that supports a refresh rate of 90 Hz, a screen-to-body ratio of 81.2% along with an aspect ratio of 20.5: 9, and it will have a central hole punch for the selfie camera.

As for the quality of the design, the back interface is made of polycarbonate including the frame. As for photography, it is equipped with a dual rear camera with artificial intelligence technology, the primary camera with a resolution of 50 megapixels, and the second camera is a QVGA AI lens with LED flash.

The Infinix Hot 20 will be powered by a Mediatek Helio G85 SoC which is based on a 12nm manufacturing process. The chipset supports CPU up to 2.0GHz Octa-core and Mali-G52.it GPU and Provides two options for 4/6GB RAM and 128GB internal storage, the smartphone also supports expandable storage options Which is expanded up to 256 GB from the micro SD card slot

The device will carry a huge battery capacity of 5000 mAh along with support for fast charging with a power of 18 watts. And it runs Android 12. For security, it offers a side-mounted fingerprint sensor including face unlock.

Pricing for this phone will not be revealed, but it is expected to start at $123 for the 4GB RAM and 128GB RAM variants.