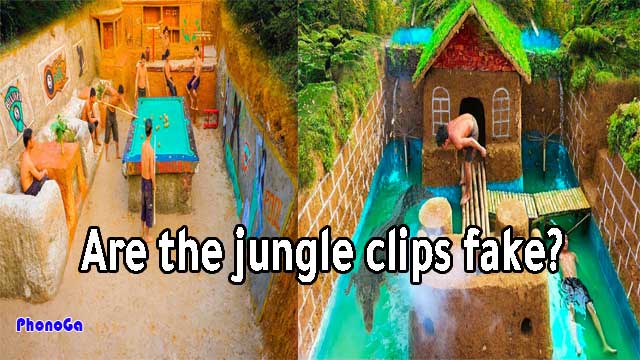 You must have heard or once while browsing YouTube a video of men or children doing primitive work in the forest… such as building houses, huts, swimming pools, and even wonderful structures in the middle of nature like this, this or this, or even this.. all using primitive tools and materials. It is located inside the forest. These clips have garnered millions of views and their owners have gained a lot of fame... In fact, there are a lot of channels that publish this content and you may have seen at least one clip of them... But let me shock you and tell you that most of these clips are fake!

Are the jungle clips fake?

The story started with the Primitive Technology channel of an Australian named John Plant…. He started his career in the channel 7 years ago by posting videos of himself building structures using primitive tools found only in the forest such as dirt, mud, and tree trunks. The first clip of him spread very quickly, and he is building a small hut and has garnered more than 30 million views so far... It seemed clear that people liked the idea and its simplicity, especially since the owner of the channel does not speak at all, and completes construction in areas with beautiful landscapes. His YouTube channel now has 10 and a half million subscribers. With the success of this idea and people liking it, more and more people started creating similar channels that offer the same content… but there is an important difference from John’s channel… the content is fake and not real!

In fact, what you see in front of the camera is completely different from what happens behind the scenes... and here is the proof... The YouTuber clip has spread providing this type of content, raising many doubts and raising many question marks about the authenticity of the topic... (Here) it turns out that this YouTuber uses drilling machines that do not She appears in front of the camera, as he tries to convince the viewer that he is doing all the work on his own... and this is what the tracks of the excavators that appear in the clips show. YouTubers also use pieces of wood and bamboo that are cut by professional cutting machines, not by hand tools. Some videos indicate that people are preparing cement through the waters of the nearby river, but a civil engineer has revealed the truth and asserted that cement cannot be prepared through the water of a running river. So what is used is just plain clay that is not suitable for the construction of many structures that appear in the sections.

Another fake is the water used to fill swimming pools. It is one of the most facilities built by forest men in the sections... First, the water appears in some sections incredibly pure and blue in a natural environment full of trees, weeds, dirt, and insects... This strongly suggests the hypothesis of the use of chemicals and colored dyes. But what about the water itself? Where did it come from? There are also questions about the sources of water to fill the basins... as most of the areas where photography is done are far from rivers or water courses. If you look closely at some of the shots, you will find blue pipes (Here) which means that the water used in the installations comes through these pipes and not directly from the river, and this is the opposite of what we see behind the camera where they use bamboo to transport water from the river to the swimming pools.

The bottom line is that what the owners of the channels that provide this content do are the opposite of what they promote behind the camera, and it is against the basic idea that the process is primitive. Even worse, they are harming nature in order to gain fame... The evidence is the photos and clips that showed (Here) some areas where a full working team appears with their equipment in addition to the waste and tools after the completion of filming.

Now let's ask the most important question... Why do these people do this? Why do they laugh at their followers? Quite simply: for the sake of the nobility of the views... these clips have been so successful that they have attracted millions of views in a short time. One of the clips has garnered nearly 500 million views. The more views, the higher the income and profit... even at the expense of credibility and the beauty of nature. For example, one of these channels now has more than 10 million subscribers and brings its owner more than $3 million in revenue per year. Of course, here we are not talking about everyone... There are channels that provide content with complete transparency and credibility.