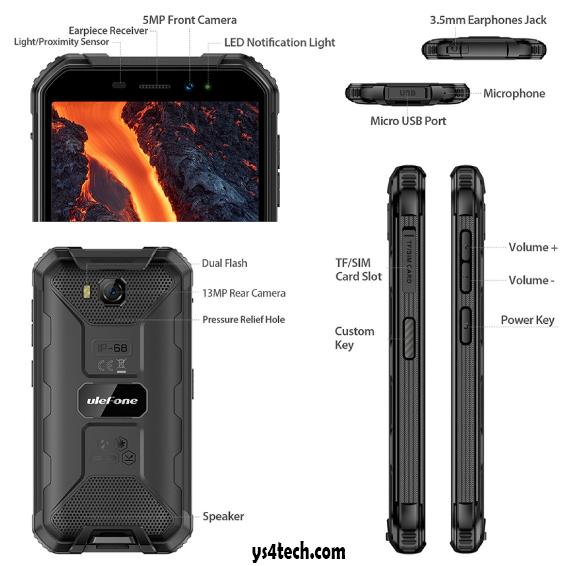 Ulefone has just released the Armor X6 Pro, the latest model in its Armor X series. The device is clearly tough, measuring 150 x 78.9 x 14.4mm and weighing 227 grams. In keeping with the company's heritage, the body is extra tough, as evidenced by IP68/IP69K and MIL-STD-810G certifications. The Armor X6 Pro should be able to withstand 30-minute immersions in up to 1.5 meters of water, as well as water jets and all manner of fine dust and particles. Its multi-layered polycarbonate outer shell is filled with waterproof adhesive tape and gasket sealing rings in every possible crack. The device's exterior is also waterproofed with a macro-molecule coating. According to Ulefone, the Armor X6 Pro is best suited for industrial use.

Ulefone is also proud that the Armor X6 Pro comes pre-installed with the latest Android 12 OS, as well as all of the advanced security and extra features that it provides. The ROM itself is clean, with no ads or unnecessary bloat, and with large and simple UI elements. For added convenience and gloved operation, the phone also has a programmable physical button on the side.

The Armor X6 Pro's other hardware includes a 5.0-inch IPS LCD panel with 720 x 1280 HD resolution. A MediaTek Helio A22 4G chipset with dual SIM support, 4GB of RAM, and 32GB of storage, expandable via SD card, is at its heart. The phone has Wi-Fi ac and Bluetooth 5.0 for local connectivity, as well as GPS with GLONASS, BEIDOU, Galileo, and NFC with Google Pay. An accelerometer, proximity sensor, light sensor, and e-compass are among the other sensors. A 3.5mm jack and an FM radio are also included.

On the back, there is a single 13MP, f/2.2, IMX214 camera with a dual LED flash that can record up to 1080p video. The same can be said for the 5MP, f/2.2 OmniVision OV5670 selfie camera. Underwater photography is promoted specifically as a feature. The device is powered by a 4,000 mAh battery and charges at 5W via a micro USB port.